Select the videos below to watch the three part  Series:

The Progenitor of the Clan was Leod, who gained possession of much of Skye, including the Cuillins, Harris and Lewis in the
mid 13th century. Later tradition claimed that he was descended from the Norse Kings of Man. Dunvegan was acquired by
marriage to the MacRailt heiress and became the principle seat of the Clan where the Castle was built and developed. The Clan
takes its name from Leod, whose sons were MacLeod, mac being Gaelic for son.  Leod had two sons, or grandsons, Tormod, English Norman, and Torcall, English Torquil, who became progenitors of the MacLeods of Harris and Dunvegan and the MacLeods of the Lewes.

In the 14th century the Macleods of Harris acquired Glenelg on the mainland at the strategic crossing point to Skye. Malcolm
MacLeod, 3rd Chief of Harris, built the keep at Dunvegan.

The MacLeods of the Lewes acquired Gairlock and Assynt on the mainland and the Isle of Raasay.

Both MacLeod Clans supported the MacDonald Lord of the Isles, semi independent king on the west coast. In Skye land was
lost to the MacDonalds. After the forteiture of the Lordship of the Isles, in 1493, the MacLeods and the MacDonalds began
feuding. At this difficult time Alexander MacLeod, 8th Chief of Harris, known as Alasdair Crotach, kept the clan lands together
and built himself a fine tomb in St. Clement's Church, Rodel, Harris.

Alasdair Cotach MacLeod built the Fair Tower and the Fair Flagis still the most celebrated relic at the Castle. The flag was given
to a MacLeod chief by the fairies and had the power to summon up a magic host in time of need. It was twice used in defeating the MacDonalds.

The MacCrimmons, hereditary pipers at Dunvegan, became preeminent pipers and people were sent from all over Scotland to be perfected as pipers. The MacCrimmons had a piping college at Boreraig, where a cairn now commemorates the family.

Lochcarron of Scotland (the Worlds leading manufacturer of Tartan) has produced an interesting, interactive map of Scotland,
which shows the lands of not only the MacLeods but of other Clans. Visit the site by clicking the below button. When the site
comes up, click on any area identified as MACLEOD and you will see all Lands the MacLeods have, as well as having a brief
information displayed, the Clan Crest for MacLeod of Harris, and the MacLeod of Lewis Dress Tartan. If you would like to learn
about other Clans, select the name of the Clan you wish to learn more about.

Lochcarron of Scotland has produced another interesting, interactive Map - Clan Battlefield.  Scotland has a rich Clan history, and this map documents all the major battles between the many clans through the ages. Filter by your clan of choice, or scroll along the timeline to discover more about each Scottish Clan battle that took place between the 11th and 18th Centuries, including Outlander battles.  Select individual battles on the map and read more about them.

Peter MacLeod (Australia) along with Andrew MacLeod - Clan Historian, have produced two amazing DVDs which showcase the History and Legends of the MacLeods and Skye, and the various battles that our Clan was engaged in.  You can Order these two DVDs (select the button below for DVD Info and order details). 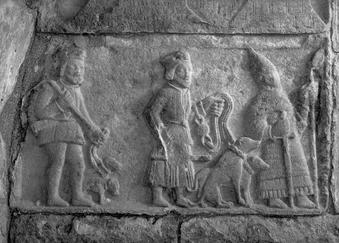