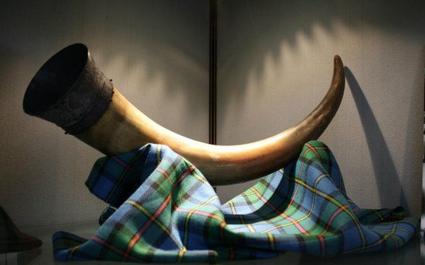 In the late 16th century Sir Rory Mor MacLeod, 15th Chief of Dunvegan, fought in Ireland against the English, and brought home a beautiful drinking cup. he rebuilt a great hall at Dunvegan. Sir Rory brought to an end the feud with the MacDonalds of Sleat. Donald Mor MacCrimmon wrote the pipe tune MacLeod's Salute for the occasion.

At the same time, family feuding between the children of Roderick MacLeod, 10th Chief of the Lewes, led the island being lost first to the Fife Adventurers and then to the MacKenzies of Kintail, who, with their usual guile and force, also acquired Assynt and Gairloch on the mainland. The line of the Chiefs of the MacLeods of the Lewes died out and remained represented only by the MacLeods of Raasay, opposite Skye.

In the Civil War, in the 17th century, the MacLeods of Harris supported King Charles and lost 1,000 men at the the battle of Worcester, in 1651.

John MacLeod, 18th Chief of Dunvegan, known as Iain Breac, extended the castle and was the last chief to live there permanently in full Gaelic splendour, with bards, pipers and genealogists. He died in 1693.