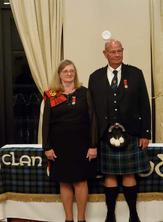 Robert and Sandra MacLeod were awarded the Clans Person of the Year medal for their outstanding service to CMUSA in the roles of RVP Coordinator and National Secretary. They served with enthusiasm and greatest loyalty to the society. Over their years of service, they consistently attended meetings both in the USA and in Scotland. They were both involved in preparing guidance through Standard Operating Procedures, help in organizing AGMs, and myriad other tasks not assigned such as ensuring that CMUSA was represented in Scottish festivals in New England as well as in the Carolinas.

Both Sandra (Sandy) and Robert (Bob) well deserved this recognition of their support to CMUSA. 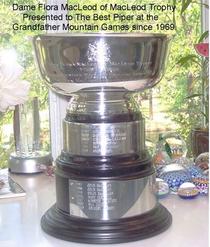 Clans Person of the Year:

Clans Person of the Year is the most prestigious award given by the Clan MacLeod USA. This award goes to the Clan MacLeod USA member that has contributed greatly to the goals of the Clan. The award has existed since 1966, with only about40 recipients, among the thousands of USA members. It is a privilege to honor the recipients of the “Clans Person of the Year” in the following page.

The recipient is selected yearly, through recommendations of the Clan Council and Past Presidents. Franklin Wyatt, as awards chairman polls the Council to select the recipient of "The Clans Person of the Year." 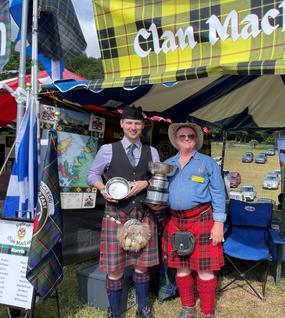 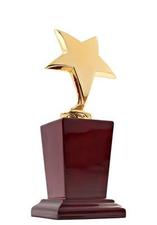 2022 Clans Persons of the Year Robert and Sandy McLeod