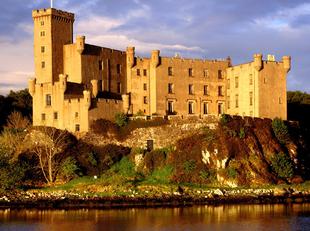 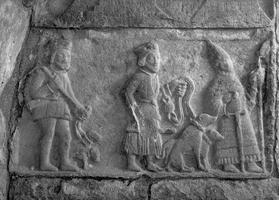 CELEBRATE THE YEAR OF THE CROTACH~
“The Crotach” lived until the age of 97, and died in 1547. He was buried in St. Clement’s Church at Rodel. On the walls of his
tomb are some of the finest historic stone carvings to be found in all of Scotland. His wife Tri, Cameron’s daughter, also lived to be
an old age, and when she died she was buried alongside him, in the shelter of her husband.

To Learn more about Alasdair "Crotach" MacLeod ClickHere for the Story Booklet.

You can also order a 4' x 8' printed indoor or outdoor PVC Banner, complete with grommets for hanging, from a company called
"Banners on the Cheap". Call one of their customer representatives at (877) 710 1876 and tell them you want to purchase a
duplicate of order #72524069, sign ID = 814883880. The cost is $41, plus shipping. Click here for their website. The Scene
on the banner is taken from the tomb of Alasdair Crotach in St. Clement's Church, on the Isle of Harris. There are many MacLeod
stories associated with "The Crotach" such as the King's dinner on MacLeod's Tables, the Massacre of Eigg, and the Unfurling of
the Fair Flag.