Norman MacLeod of MacLeod, 22nd Chief of Dunvegan, became chief as a baby in 1706 and died in 1772. During his life the
customs, laws and manners of the Highlands changed out of all recognition. He lived only occasionally at Dunvegan and
pursued a political career, being M.P. for Invernessshire from 1741 to 1756.

During the Jacobite Rising of 1745, though Bonnie Prince Charlie had some hopes that Norman MacLeod would join him, infact
the chief raised 700 men to fight for King George and the Hanovarian cause. At the skirmish at Inverurie, in December 1745,
though the chief behaved gallantly, his men ran back to Elgin. The Chief's piper, Malcolm MacCrimmon was made prisoner. In
February 1746 Norman MacLeod, accompanying Lord Loudoun and his troops, was routed at Moy, south of Inverness, where
the Prince had been staying. Donald MacCrimmon, the Harris piper, was killed and his brother wrote the lament Cha Til
MacCrimmon.

The MacLeods of Raasay, however, joined Bonnie Prince Charlie and fought at the battle of Culloden in April 1746 but, after the
battle, Raasay House was burned and the island was ravaged from end to end.

Norman MacLeod of Macleod, 22nd Chief, died at St.Andrews in 1772, leaving huge debts. He was succeeded by his grandson,
Norman MacLeod of MacLeod, 23rd Chief, who became a soldier. he was captured entering Boston Harbour in 1776 but later
went to India where he raised the 2nd Battalion the Black Watch, later 73rd Regiment, and became a Major General. He
amassed a fortune but spent much of it attempting to get elected to Parliament and in restoring the keep at Dunvegan Castle.

Norman MacLeod of MacLeod, 23rd Chief, died suddenly in 1801, and was succeeded by his son John Norman MacLeod of
MacLeod, 24th Chief, who carried out further improvements to the Castle and added the entrance from the east. He sold
Glenelg for a staggerig £100,000 but cleared large areas of Bracadale to make way for sheep. He failed to be elected M.P. for
Invernessshire but amassed more debts and he entailed the estate. he also died suddenly, in 1835, going to vote at his own
election.

Jame MacLeod, 12th Raasay, created a magnificent mansion on the Isle of Raasay, but his son John MacLeod, 13th Chief of
Raasay, was forced to sell the island in 1843. He emigrated to South Australia and was eventually succeeded by his nephew,
Loudoun Hector MacLeod, 16th of Raasay, who had been born on Tasmania. 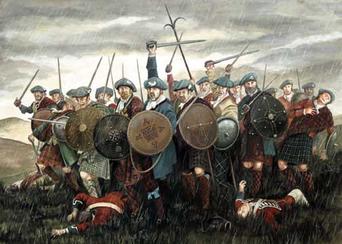 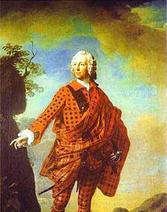